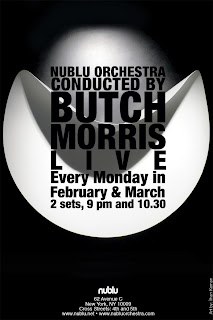 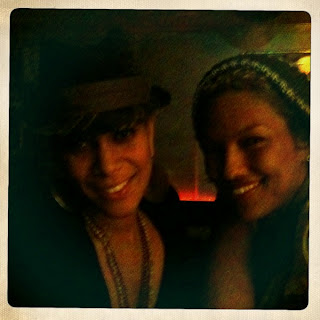 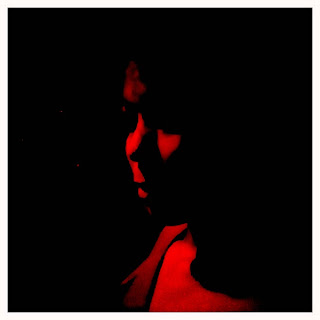 Today was Monday nite in the city and we just played 2 long and super fun sets as Nublu Orchestra conducted by Butch Morris. This is a training camp for your brain , an exercise in composed improvisation where one must make musical decisions in a split second. You sit there on stage with the horn in your mouth, sticks in your hand or the mallets for your vibraphone. You get a cue from Mr Butch Morris to take a turn , or to invent a melody , or play something rhythmic that makes the whole band of 16 pieces go into one direction. There are moments when it feels you're right in the epicenter of something growing , and then you have to relax , relax to the extreme so you can get your impulses so fast in between your ears and fingers and in whatever is going on in your brain . Once you're starting to execute ideas on a rapid pace in tune with the whole band, you open new spaces where one starts navigating through unknown territories... instead of following the patterns you're used to . This is what Mr Butch Morris does on a full time basis. He makes you be in the moment.
If you have to classify Butch , take Miles Davis' heavy funk moments mixed with Philip Glass, then add some Jimi and then some Ornette and spice it all up with some chants ...and then through the doors of Nublu with it's own vibe and you get Nublu Orchestra conducted by Butch Morris. Ofcourse it is silly to compare a Master with other Masters , one shouldn't even start doing that but people do try to classify this music before and after the shows....Anyway , it actually became a long pleasent Monday nite .

After the band played, Vladi took over on the turntables and played lots of goodies , from Miles Davis electric-trip moments to Paul Gonsalves 27 chorus solo, from Duke Ellington live at the Newport Jazz Festival to Marc Bolan's T-rex, to Led Zepplin...0 and in between great Nublu remixes. The nite became wild and different , In the end I would say the feel was jazzy themed..
The beautiful TinaKristina played a set after the orchestra. She has a nice tone to her playing and persona .
Marla Turner who used to sing with Wax Poetic came to check the music and Toni K and girlfriend came later on in the nite. Toni K is a real fun dj that spinns now at Nublu every 3rd friday of the month. It's a party when she spins that's for sure. Clark Gayton was there..and ofcourse the whole big band. Mellow and nice and intense I would theme the nite as ....
In the picture are Toni K and friend and Marla Turner...