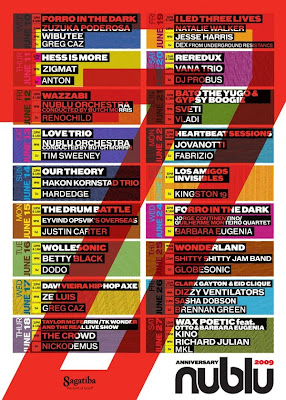 The dynamic and eclectic East Village club, founded by Turkish-Swedish multi-instrumentalist Ilhan Ersahin has reached the ripe and auspicious age of seven years and they’re throwing an 18-day party to commemorate it. Over the course of two and a half weeks the club will showcase an extraordinary sampling of the multi-national, multi-ethnic polyglot of musical talent Nublu has attracted and cultivated over the years. How else to celebrate one of the most unique and diverse venues this side of the equator than to have the entire Nublu extended family of bands, DJs, musicians, and songwriters come together to perform consecutive nights in the same room that could barely contain seven years of dazzling, late-night musical alchemy?

The 18 day lineup includes Nublu stalwarts such as Forro in the Dark, Wax Poetic, and Love Trio, all of whom have releases out currently on Nublu’s very own label Nublu Records. But the plethora of performances also includes new acts such as the humor tinged rock/jazz/experimental electronica stylings of New York based Danish act Hess is More, new Brazillian Girls side project ReRedux, Betty Black with members of Kudu, and the new Nublu featured artist Otto, performing with Wax Poetic. In addition there will be plenty of the type of musical amalgamations and surprises the club has become known for like the Drum Battle, which will include drummers such as Kenny Wollesen, Aaron Johnston, Deantoni Parks, and Cindy Blackman, Italian superstar Jovanotti, an assortment of themed nights, and a different DJ every night such as Tim Sweeney, DJ Probus, Nickodemus, Brennan Green and many many others.

Owner Ilhan Ersahin sums it up best, saying, “People always ask us what is the style and genre of Nublu. I tell them it is world, electro, indie, jazz and more. What is the Nublu sound? It’s music, Nublu music. We are continuing to create fresh, new music as the neighborhood has been doing since the 40's. Now its our version!”

Nublu’s seventh anniversary will be the best yet. It’ll be a collection of the world-class array of musical talent that has come together over the years and conspired to create the distinctive and unparalleled Nublu sound. Every night will be a unique example of the vibrant creative energy Nublu has been bringing to the NYC scene for the last seven years.
Posted by your friend at 11:17 AM No comments: Danish sensation Mikkel Hess aka Hess is More is something like the Danish answer to both Jon Brion and teh Flight of the Conchords. Hess is a skillful singer, songwriter, composer and multi instrumentalist with an eclectic sense that encompasses pop, rock, disco, jazz and electronica. Hess also has a unique distinctly poppy sense of humor that is very appealing and inviting even though it's often filtered through quite a dark almost Lars von Trier outlook. Read more>>

The single (available digitally only) features the super infectious whistling song Ssshhhh including an extended version of it, the intergalactic pop song the Magic Invention from t.d.p.r.c. and a remix of Yess Boss by upcoming NYC producer Pocketknife.

The US debut album Hits will be released June 9th.
Posted by your friend at 12:38 PM No comments: 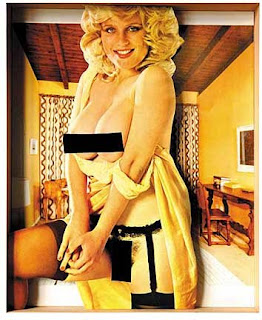 Also check out In Flagranti's latest remix of I Led 3 Lives which appeared on the Nublu Dance compilation, soon to be released on 12" along with a remix from I:Cube.
Posted by your friend at 2:00 PM No comments:

Check out a recent interview with Ilhan on Awdio
Awdio is a site that does live streams from clubs worldwide including Nublu
check em out
Posted by your friend at 1:52 PM No comments: