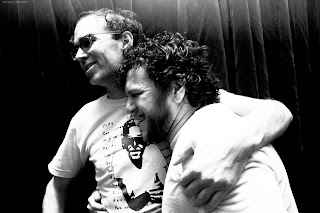 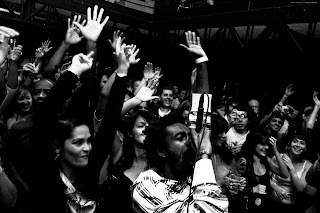 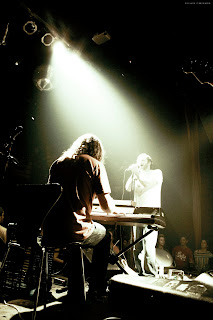 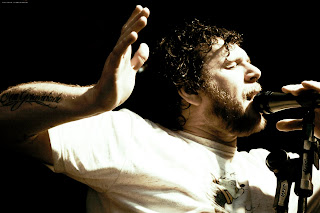 Check out these images from Wax Poetic's show in Curitiba.
The tour also took them to Rio, Sao Paulo and Florianopolis.
Posted by your friend at 12:36 PM No comments:

You were at the Grammy's recently for the Brazilian Girls' nomination. How was that whole experience?

Was corny as hell yo.  Well, not all of it, only about 84% was.  It was interesting, interesting to see people with half the talent, but all the drive and ambition.  I mean, take a pop star like britney spears for instance, she's not exactly some amazing vocalist that will blow your doors off, she looks ok, but she's not a super model either.  but, i saw her do a sound check one day before a show, with all the dancers the whole "entertainment" deal.  It was obvious then to me that this girl WORKS  super hard, everyday training, vocal coaches, dancing coaches,  just really working hard, and wanting "it" really badly.  So i guess seeing that from many other artists, grammy winning or not, did motivate me.  So i think i brought something good back from it.

For the past couple of weeks you've been playing at Nublu with your new side project with Didi. What's the story with that?

Rent baby Rent.  Duo is the new Quartet.  I love working with didi, we originally wanted to do this duo thing because brazilian girls weren't working and we wanted to pick up some dj gigs to keep working and to keep the BG name out there.  Now it's turning into more like a band, writing original music with lyrics and whatnot.  it's taking shape quickly, which is another reason why i like working with didi, we work fast together.


The sound of Redux is very clubby from what I heard a couple of times. Is it specifically aimed for dance clubs?

Yes, dance clubs and festivals, at least that's the aim, but it's already taking on other shapes.  when you write music, songs, it can be played in many formats, so some of this music could be played acoustically in a coffee shop, or done by an orchestra... but for now.... dance clubs:) a place where we can bring in a couple of live instruments like piano/keyboards and drums/percussion along with the electronic elements.


It felt like it was a mix of loops, playing live, a bit of singing. What's the music direction?

The direction is wherever it takes us as as well as where we try to take it.   so far it's taking us more in a direction of writing original music.  we started using other peoples loops, from different dj tracks that we liked, but we're quickly changing that and making everything ourselves.


Your baby boy just recently turned one. How has that changed your life in terms of touring, making music, etc?

Well as far as the timing goes, i haven't been touring quite as much since he's been born, which has been nice to spend as much time as possible with him. he's been on the tour bus a couple of times, and traveled to turkey, paris, california, and brazil with me.  so i prefer to be with him a lot.  that said i guess i just try to use the rest of my time more wisely.

What's the next step for the Brazilian Girls?

We decide when we do another record, and maybe who we do it with.  sabina just gave birth, TODAY, a baby boy, so we still have some time to decide what we'll do.  I think in another 6 months i'll know how to answer that question better.
Posted by your friend at 12:09 PM No comments: 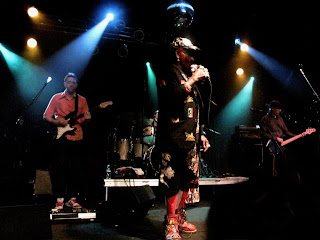 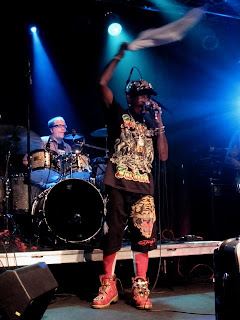 A few snapshots of Lee Scratch Perry show last night. He played a mix of new and classic songs like War ina Babylon and his latest single Pum Pum. I couldn't help but notice his band who appeared to be all NYC musicians, a couple who play at Nublu every once in a while. Nevertheless, they sounded good and the show was good, though I did wish it was a show I could've experienced 20-30 years ago. Perry turns 73 next month !!!
Posted by your friend at 1:06 PM No comments:

A compilation to make you DANCE 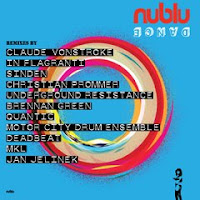 Here are two highly on demand remixes from the Nublu Dance compilation.
the Sinden remix has been featured in the latest Fabric mix, a popular DJ mix series produced by the Fabric club in London

Other remixers include In Flagranti, Motor City Drum Ensemble, Christian Prommer, Quantic, Underground Resistance, etc.
Get your free high quality download of Cihangir (Brennan Green remix)
Posted by your friend at 11:50 AM No comments: 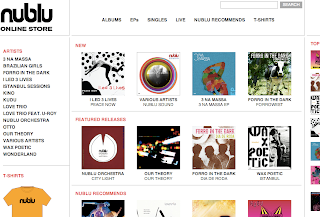 Nublu launched the new digital store! Besides Nublu's catalog, there will be live recordings for sale as well as records of friends Nublu recommends. One of those is KiNo's self-release Map of the Universe.
Also highly recommended is Nublu Orchestra's live session at the Saalfelden Jazz Festival in Austria.
Downloads are high quality mp3s. You also have the option of purchasing WAV files for an extra fee. No DRMs, music will play in any player.
Posted by your friend at 10:19 AM No comments: 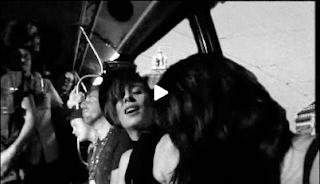 Brazilian Girls have a new music video directed by Wayne Price.
It's for the song Berlin from their latest album New York City which is up for a GRAMMY Award for Best Electronic/Dance Album of the Year. The other nominees in that category are Daft Punk, Moby and Cindy Lauper. We wish them luck this Sunday!!
The video is shot in HD mixing 8mm home movie footage from the 1930s in Berlin. Very cool!
Posted by your friend at 9:19 AM No comments:

"The mix is intended to distract you from your repetitive daily commute. It' a bit rough on the edges but I think you'll enjoy..." McLeod
Listen here
Posted by your friend at 9:30 AM 1 comment:

It was my first time seeing Curumin play. Only caught their second set and it was great
It wasn't a packed house, but they definitely turned it into a party for those that were there. They left the crowd asking for more... and more
thanks to Pinar for the photos 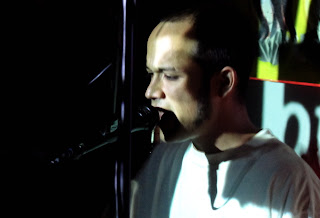 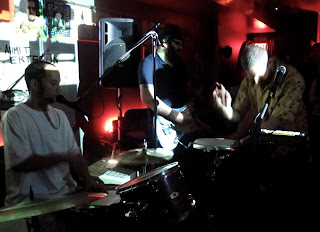 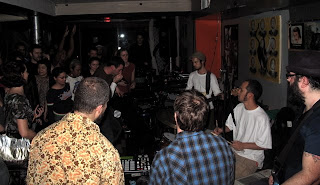